The CAI of Archaeometry and Archaeological Analysis of the UCM provides technical support with tools such as 3D GPR, photogrammetric flights and spatial analysis.

The objective of this project was to analyze and present the data obtained in a geophysical survey of the archaeological site in the Cerro de Virgen de la Muela, in Driebes, Guadalajara. The CAI of Archaeometry and Archaeological Analysis of the UCM has collaborated with the archaeological team in charge of the site since 2016, when the first surveys were carried out.

Techniques such as GPR and photogrammetric drone flights were used as non-destructive methods to obtain information on the site without the need to excavate. The results from these surveys formed the digital base on which the data analysis was performed.

GPR-Slice post-processing software was used to analyze the data from the GPR to produce clear 3D images of the data.

Using GPR-Slice, both the processing of the raw data of the GPR and the adjustment of the GPS data for georeferencing of the acquisitions could be done effectively.

From B-scan data, a 3D block of data can be made by slicing/gridding and interpolation. The data can be viewed in a series of horizontal depth-slices or C-scans with thickness of 1.4 cm. The areas of high amplitude reflections were represented in red color. These areas are considered 'anomolies'.

Occasionally, it's possible to observe anomalies of different typologies of the deposit structures with high precision. 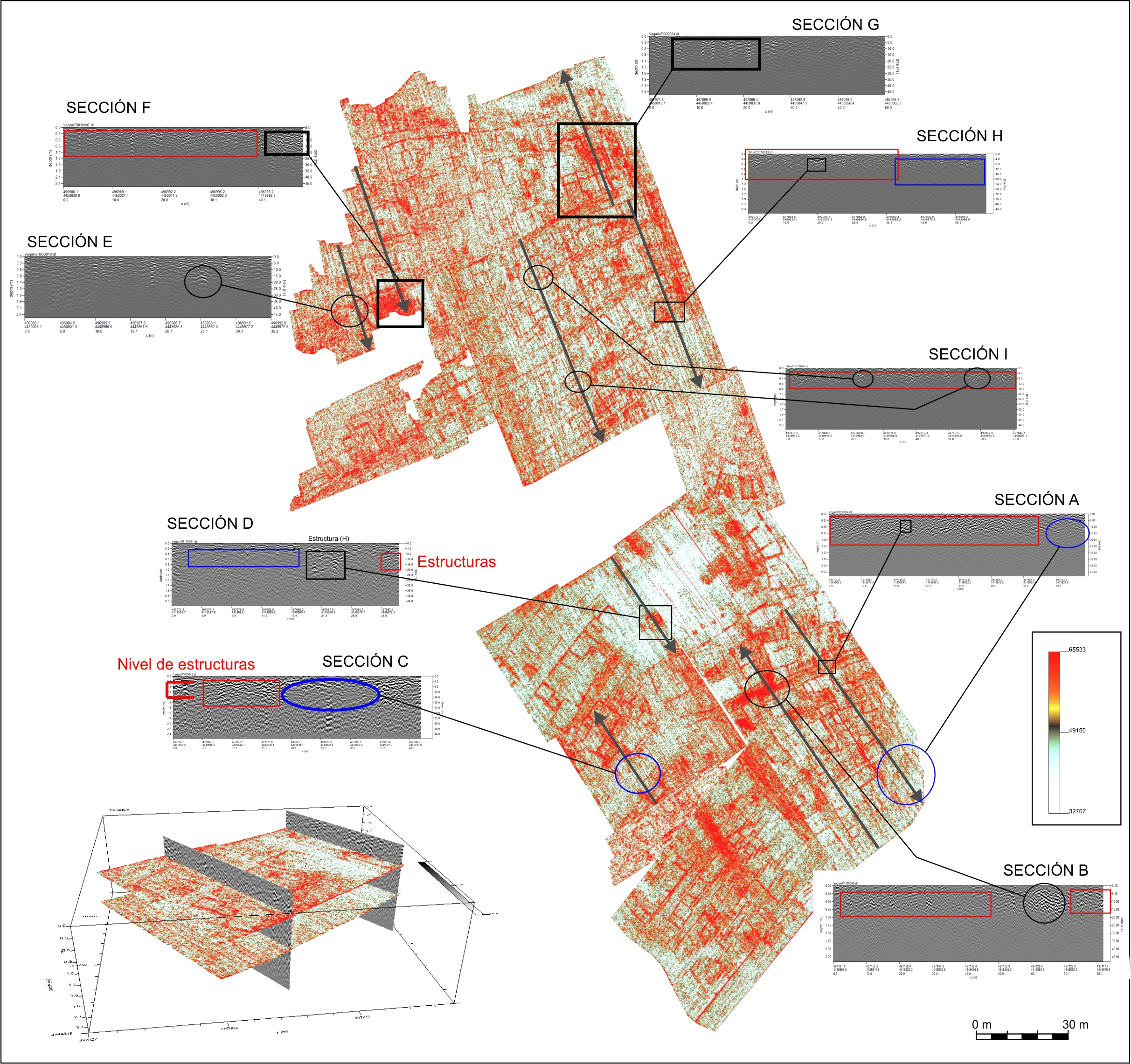 Figure 1. GPR maps with sample sections (CAI of Archaeometry and Archaeological Analysis of the U. C. M.).

In the central area, adjacent to the current hermitage of the Virgen de la Muela, there is a large space without anomalies of approximately 1,400 m2 in a rectangular shape and in which punctual and equidistant anomalies are detected in the perimeter area.

In the GPR map figure 1, section D, hyperbola-type anomalies are observed at an estimated depth of around 20 cm, which corresponds to the base of the gypsum lithology column.

In the part of the sections of the zone without anomalies, the absence of significant hyperbolas is observed, which is indicative that it is an open space without structures, as can be seen in the horizontal section or slice. There is also an isolated building in the shape of an “H” that presents a structure of great entity with powerful walls and internal fillings, internal reflections of both small hyperbolas and pseudo-horizontal reflections of each row of ashlars. It has a rectangular shape and is between 20 and 80 cm deep. 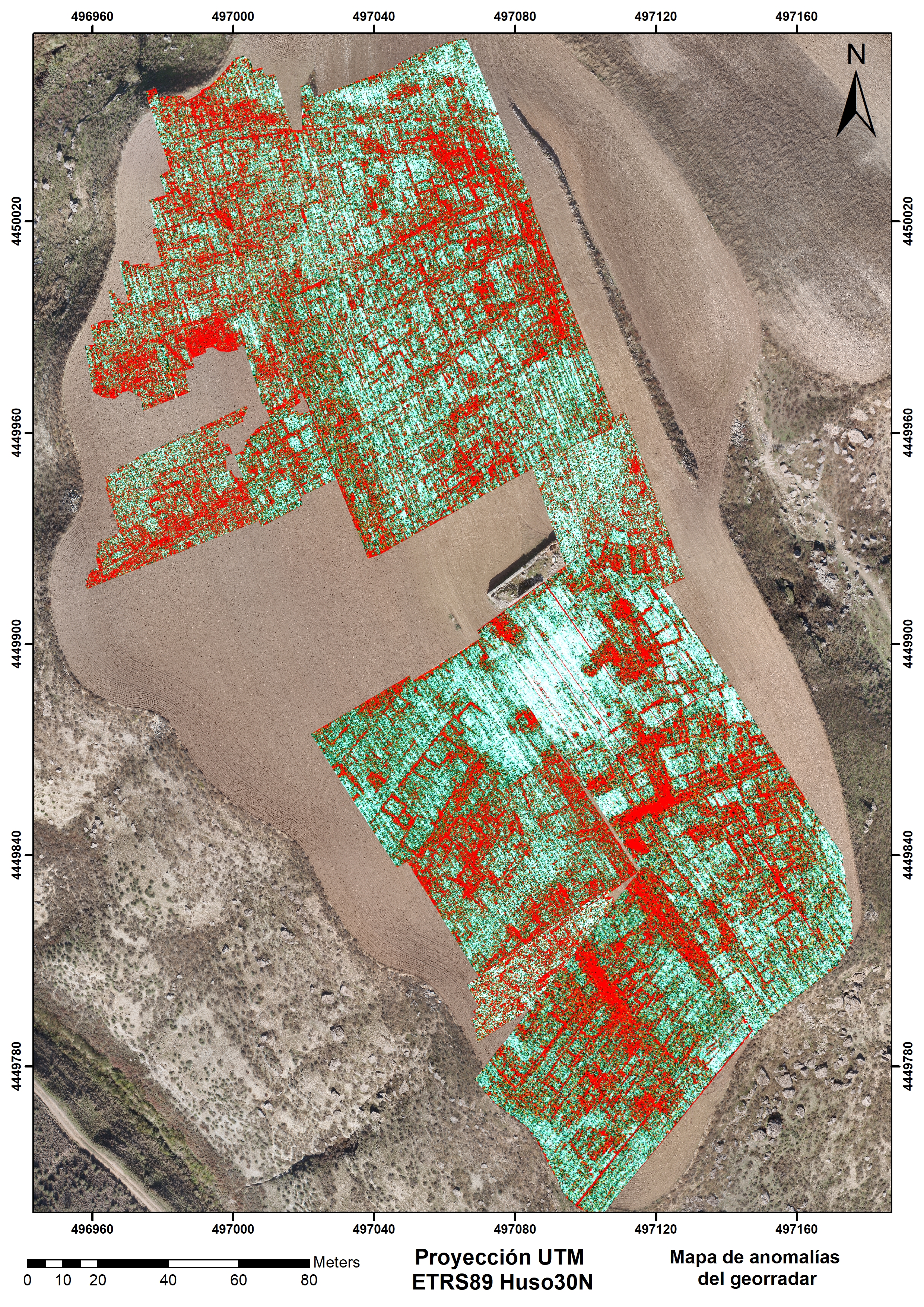 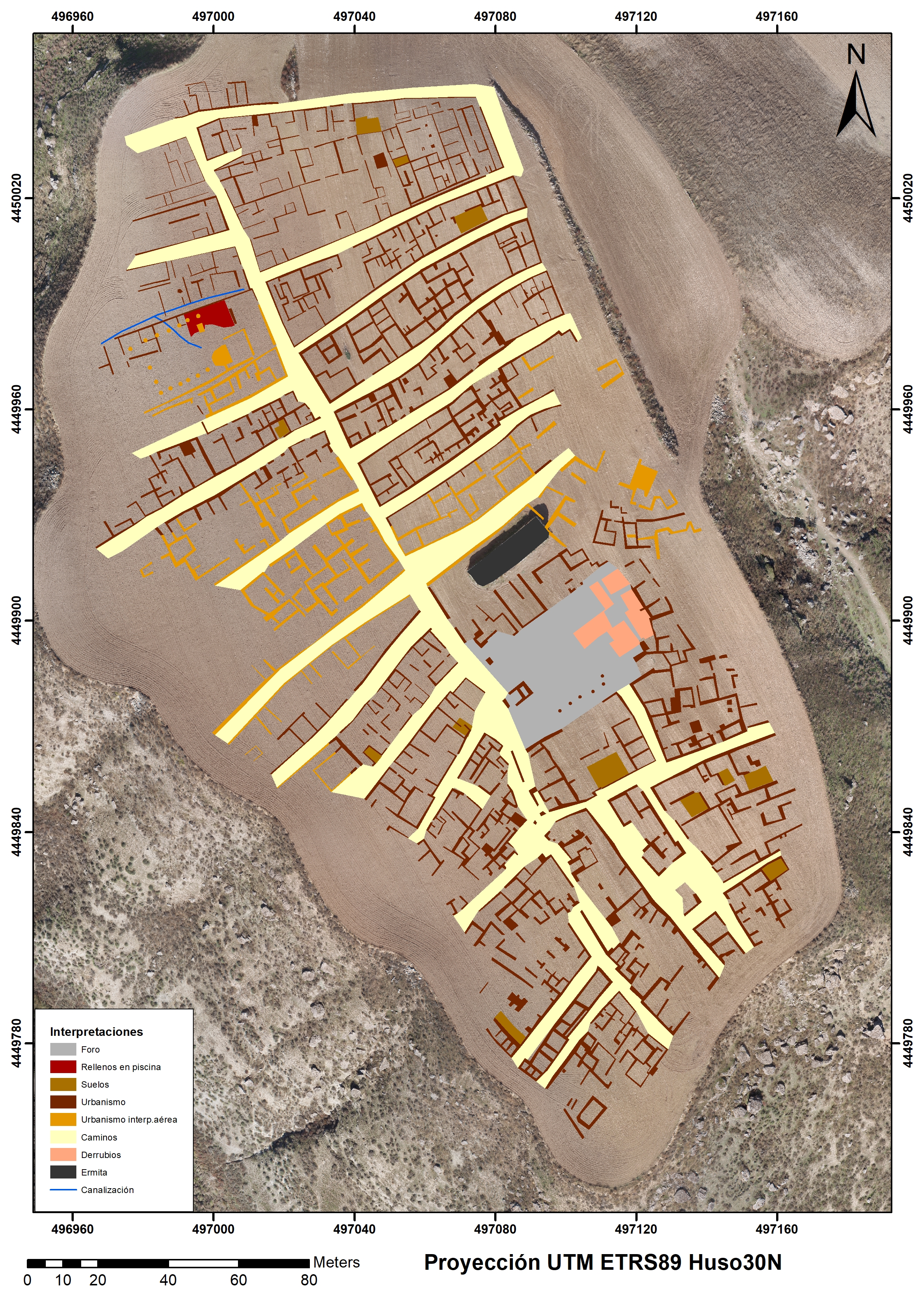 Figure 3. Map of interpretations of results on orthophotography (CAI of Archaeometry and Archaeological Analysis of the U. C. M.).

In the rest of the site, areas of building structures and streets are detected with the corresponding anomalies that will make up the amplitudes that mark the red colors of the slices at different depths (figure 2). Countless walls of various types and thicknesses have been detected. Practically horizontal reflections with rectangular morphologies are detected in the slice view of the 3D block. They surely correspond to paved areas or mosaic-type soils that, when presenting a change in medium, cause a reflection peak in the GPR trace (figure 1, sections A and B).

The gypsum layer found in the lower geological level produces a similar reflection, so in some cases it is impossible to accurately differentiate one typology from another, so it is convenient to perform an interpretation by location and the environment in which it occurs.

Thanks to GPR-Slice's advanced capabilities, it is possible to discern different particularities of the reservoir with the correct interpretation of the radargrams and 3D blocks. The analysis of the GPR data focuses on the recognition of anomalies, whose geometric organization suggests an anthropic origin of possible archaeological interest.